Borová Lada is a settlement with a small number of inhabitants but which covers a large area of enchanting, natural beauty. It is situated at a height of around 900 m above sea-level on the confluence of the Vydřa stream, the Teplá (warm) Vltava and the Malá (Small) Vltava (Vltava stream). At present it has around three hundred permanent residents. The extent of the parish is almost 7.000 hectares. The settlements of Nový Svět and Svinná Lada belong to Borova Lada, together with the now destroyed settlements of Knížecí Plána, Zahrádka, Černá Lada, Šindlov and Paseka. The parish of Borová Lada liese partly within the Šumava National Park, and partly within the Šumava Protected Landscape Area.

It is estimated that Borová Lada was founded around 1750. In 1721 František Adam of Schwarzenberk already founded a princely hunting estate here and in 1724 the Jägerhäuser (later Na Myslivnách) hunting lodge was built.
From 1750 the gradual colonisation of this isolated area took place - primarily from the neighbouring parishes of the Vimperk estate. By 1855 26 mostly wooden houses stood here and the population had risen to 230.
The strategically situated settlement at the confluence of three mountain streams stimulated the development of certain types of industrial production. There were 3 sawmills, a mill, a small iron-works and the Eibner Match Factory in the village.

There was never a church or chapel in the settlement. A brick chapel with a high bell-tower and beautifully worked gables stood outside the village at the edge of the wood. A way of the cross led away from this chapel. This jewel of vernacular architecture was, however, destroyed during the previous regieme.

The wood-cutters settlement of Nový Svět was founded two years later than Borová Lada in 1752 and it remained an administrative and clerical parish until 1945. This village under the Kamenná and Bukovec Heights was dominated by the Late Baroque Church of St. Martin. This structure was also demolished by the totalitarian regieme in 1976.

A similar fate befell whole villages situated near Borova Lada, e.g. Knížecí Plána (Princely Plains). This mountain parish was founded by Prince Schwarzenberk in 1792. In 1820 it already had 500 inhabitants, 60 homesteads, an orchard, a gamekeeper’ lodge, a mill and sawmill, a pub and a border guard’s station. A cemetary was established in 1830 and in 1834 a stone church was built. From 1902 there was a village council office and from 1930 o post office. The original inhabitants were expelled after the 2nd World War and in 1950 the whole settlement was destroyed. Today all that reminds one of the former village is the restored cemetary and a large, wooden cross that has been errected on the spot where the church stood.

Its situation in the middle of the Šumava woods and the beautiful, still untamed countryside make Borová Lada an attractive place for recreation and active relaxation to visitors to the Šumava Forest. A series of well-marked hiking trails are available to walkers and cyclists in the summer whereas in winter there are more than 50 kilometres of well-prepared and maintained cross-country ski tracks which are cared for by the village council with its income from local businesses and by the Šumava National Park. 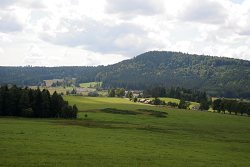 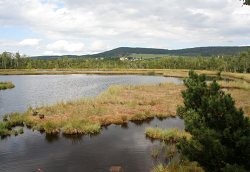 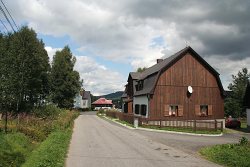 The surrounding area of Borová Lada, the valley of the Teplá Vltava and the Vydří stream is beautified with typical Šumava buildings with semi-hipped roofs and low fronts with decorated, pleated gables. It is, however, also a unique natural site with valuable bogs. The Chalupská bog which lies near Svinná Lada is particularly remarkable. The Chalupská bog is a highland peat-bog with the largest and most beautiful pool in Bohemia. The 260 m long educational trail, which leads to the pool is set on a platform and leads us through an area of dwarf pine, scarlet birch and tall bilberries to a view of floating islets with clumps of carniverous sundew beds and rare birch.